When I was looking for a copy of the famous Carrara broadside in the Royal Library, Stockholm, I happened to come across another broadside which seems to be unique and unknown.(1) I have not found references to it whatsoever. The broadside measures about 55 x , and is very well preserved. Nothing is known about its provenance, and unfortunately it is not dated. Neither is there any information about the compiler or about the composer of the short piece of music printed in the lower part of the broadside. However, the printer's imprint supplies us with some facts and a clue to an approximate dating of the broadside. It says 'In Venetia per Matio pagano in Frezaria al segno della Fede'. Accordingly it was printed in Venice by Matio (or Matteo) Pagano, who resided in Frezaria at the sign of 'Fidelity'. Matteo Pagano, about whom not much is known, was active as a printer between 1538 and 1562, mainly of books (including a book of patterns), a map of Spain in six sheets, dated 1558, and a series of woodcuts, 'The Pageant of the Doges'.(2) Consequently it seems reasonable to suppose that the broadside was printed somewhere between 1540 and 1560, which also makes it much older than the Carrara one from 1585. As there are also similarities between the two broadsides, one cannot rule out the possibility that the Pagano print may have inspired the one by Carrara.

The Pagano broadside is dominated by a cut of a six-course lute and a Guidonian hand. The body of the lute is of a very rounded shape, and the woodcutter has worked quite a lot to get a nice, ornamented rose. The neck has eight frets, obviously double, and the number of pegs corresponds to the number of strings. From the bass to the treble the courses are named Contrabasso, Bordon, Tenor, Mezzanelle, Sotanelle and Canto. The text above the lute gives instructions on how to tune the lute and how to check the tuning. The text below the instrument provides information about tablature, rhythm-signs and right-hand fingering. 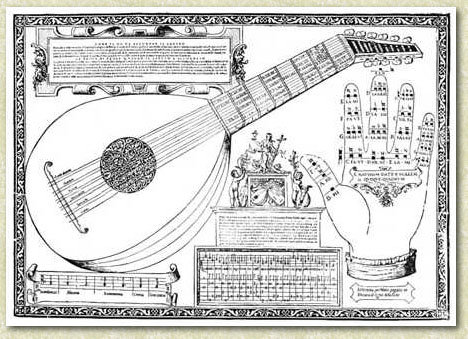 The Matteo Pagano broadside (Department of Maps and Engravings, The Royal Library, Stockholm)

Finally there is a song in mensural notation with a lute accompaniment in tablature. The text of the song is as follows: 'Qual dolce fonte o qual benigno fiume Dara tãt' aqua a q[ue]sti occhi dolenti Che piãger possa e mätenir il lume'. In the voice part there are a number of mistakes: the minim rest in bar 5 looks wrong, as it separates 'Oqual' from 'benigno'; having only one note for the two syllables of 'be-ni-' must also be incorrect; and the last note is surely not meant to be b. The lute part consists of two voice-parts, and needs to be tuned to a notational pitch of e' to match the voice. What appears to be semibreve rests in the tablature must be number ones, and the minim rest in bar 1 of the tablature is correct apart from being slightly misplaced. In bars 15 and 20 there are notes which are apparently placed on the wrong line, and so are a fourth out. There is no known concordance to help. 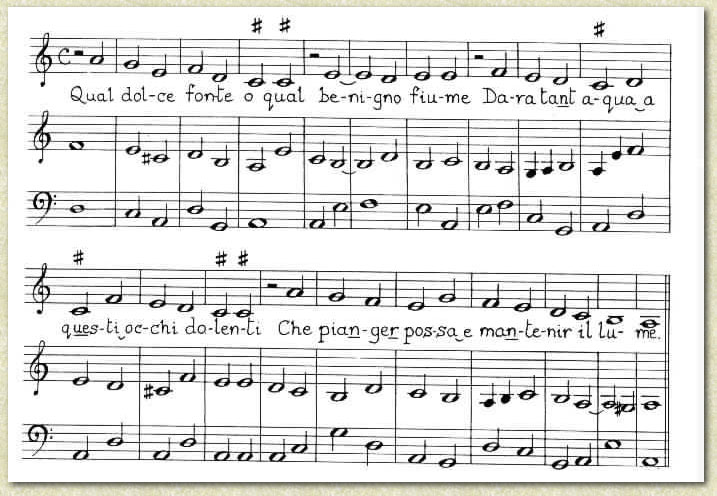 Transcription of the music in the Pagano broadside.

It is quite clear from the instructions for tuning the lute (though not from the drawings of the instrument) that the lowest three courses are to be tuned in octaves. Throughout the instructions the 6th course (Contrabasso) has been mistaken for the 5th course (Bordon), and vice versa. (This has been corrected in the translation below.) We are told to begin by tuning the 1st course followed by the 6th, thus providing a framework for tuning the other courses. The extensive instructions for checking that the lute is in tune ensure not only that the strings are in tune, but also that the frets are correctly placed. The checks are to be made as follows:

How to check the tuning.

Here follows the original Italian text on the broadside:

And in English translation:

How to tune the lute

Note that if you want to tune the lute you need to start with the 1st course, to which you must tune the 6th course, so that they sound two octaves apart. And then tune the 5th course a fourth above the 6th course, that is above the thick string [of that course]. And then tighten the thin string an octave [higher], And similarly in the aforesaid manner tune the 4th course to the 5th course. Next tune the 3rd course a third [above] the 4th course, that is [above] the thick string, and [tune] the 2nd and 3rd courses a fourth apart. And note that the 2nd and 3rd courses are in unisons, and the 2nd and 1st courses are a fourth apart. In this way it will be seen, as mentioned above, that the 1st and 6th courses are two octaves apart.

The way to check if the lute is in tune

Note that if you want to understand the tablature of the lute shown here, First you must know that those six lines, on which there are numbers, represent the fingerboard... [text unclear] And according to the numbers which you see indicated, you must finger the lute at one fret or more according to whether there is one or more number. And number 0 means that you must play that string open [..., see Note 3!] at that fret. Then those hooks which you see indicate the rhythm and the length of the notes. The stroke without a hook like this: means one beat, that is a semibreve, and the other sign with a hook means half a beat, and so on, step by step, as can be seen [below]. And note that the dot which is placed under some numbers means that that string is to be plucked upwards. And where there is no such dot, it is to be plucked downwards. And this is enough for you, virtuous young man.

The 'virtuous young man' eager to play the music must indeed have been rather frustrated by the Pagano broadside, with its mistakes in both the instructions and the intabulation! Its interest now lies in its early dating and as a forerunner to the much more developed broadsides by Michele Carrara from 1585 and 1594.

I wish to acknowledge my debt to , Stewart McCoy, Stephen Haynes, and Tim Crawford for their assistance with the translation and transcription of the music.

The Pagano broadside has been published in facsimile by The Lute Society. Contact the Secretary of the society Christopher Goodwin for further information.

1. Both broadsides are kept in the department of maps and engravings in the Royal Library, Stockholm. The Pagano print has the shelf number Musikalier, Skåp 6c, Hylla 23. The broadside of Michele Carrara, dated 1585, is listed in Howard Mayer Brown, Instrumental Music Printed Before 1600 (Cambridge, Mass., 1965), p. 342, but the copy in the Royal Library is not mentioned. This copy was observed by C. G. Stellan Mörner in 'Rariteter ur en okatalogiserad notsamling i Kungl. biblioteket, Stockholm', Svensk tidskrift för musikforskning 43 (1961), p. 273. Both broadsides are also mentioned in my article. 'Lutan i Sverige - tiden 1520-1560', Svenska Gitarr- och Lutasällskapet [Journal of the Swedish Guitar and Lute Society] (1986), part 1). pp. 32-33

3. There appears to be a line missing here: '... and another number means you must stop it...'

Additions, corrections are most welcome to